Ginkgo is a deciduos, dioecious (male and female reproduction parts on separate trees), shade tree that is considered a living fossil. It is the only surviving member of a group of ancient plants that used to inhabit the earth 150 million years ago. Ginkgo, also called Maidenhair tree, prefers full sun, medium moisture, sandy, well-drained soils but is tolerant of many environmental conditions including alkaline, acidic, saline, clay, and compacted soils, air pollution, heat, deer, and urban conditions. It is great to plant in parks, commercial sites, and along streets. The iconic leathery, fan-shaped leaves are a bright green and turn a golden yellow in the fall. 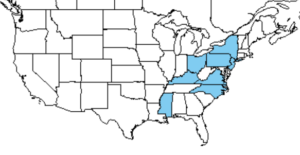