Easily grown in average, dry to medium, well-drained soils in full sun to part shade. Prefers uniformly moist soils, but tolerates both dry and wet conditions. Also tolerates poor soils, drought, heat, cold and wind. This medium-sized, spiny, deciduous tree features orange-brown bark, ovate shiny dark green leaves, milky sap, thorny twigs and large wrinkled fruit. Leaves turn yellow in fall. Osage orange is dioecious (separate male and female trees), with non-showy greenish male and female flowers appearing in clusters on separate trees in June. Fertilized flowers on female trees give way to inedible grapefruit-sized fruits which are commonly called hedge apples. The common name osage orange is primarily in reference to a combination of factors: (a) the original range of the plant overlaps in part the range of the Native American Osage Indian tribe and (b) the bark, wood and roots are orangish and the fruits somewhat resemble oranges in texture. It is not related to oranges, however, but is a member of the fig family. Each fruit is actually a dense cluster of hundreds of small fruits. The wood is long-lasting, dense and tough. Native Americans used the wood for bows, hence the common name of bowwood. As settlers pushed westward toward the Mississippi River and beyond in the 1800s, fencing materials were quite expensive and in short supply. In lieu of fences, thousands of miles of hedgerows were planted, with osage orange being a prominent inclusion. Osage orange suckers freely and quickly forms an impenetrable barrier due to its vicious thorns which are particularly nasty on new shoots. Hedgerow usage began to wane in the 1870s, however, with the advent of barbed wire. 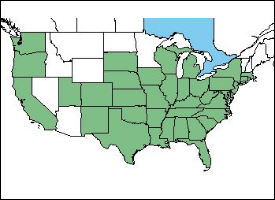