Staghorn Sumac is a large native shrub that grows to a height of 15-25′ and a width of 20-30′. It thrives in average, dry to medium moisture, well-drained soils in full sun to part shade. This shrub has great ornamental value. Young branchlets have reddish brown hairs that resemble velvet on deer antlers which is where Staghorn Sumac gets its name. Tiny greenish yellow flowers bloom from June to July and give way to bright red clusters of fruit. The leaves turn a mix of yellow, orange and red. Masses of Staghorn Sumac are used for erosion control on slopes or hard to cover areas with poor soil due to its tolerance to dry soils, shallow-rocky soils, black walnut juglone, and urban soils. It won’t tolerate poorly drained sites, though. It serves as an emergency food source for many wildlife including pheasant, quail and turkey. 300 species of songbirds include the fruit in their diet. 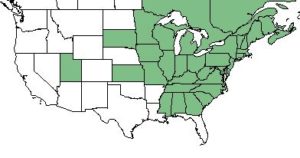 Join the waitlist to be emailed when this product becomes available