American Elm – Hastings is a source of American Elm seed that is collected from a lone tree in in Hastings, NE. that exhibits resistance to Dutch Elm disease, as American Elms around it succumbed to the disease.  It is a medium to large shade tree with a vase-shaped, broad rounded crown. Insignificant flowers appear in March or April and bloom before the leaves emerge. The flowers develop into single-seeded wafer-like samaras. The dark green, ovate-elliptic leaves are rough to the touch and turn a dull yellow in the fall. American Elm – Hastings has tolerance against drought, juglone from Black Walnut, urban conditions, and air pollution. It also is great habitat for birds and other wildlife and is a larval host to many butterfly species. 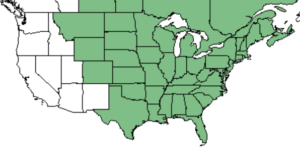